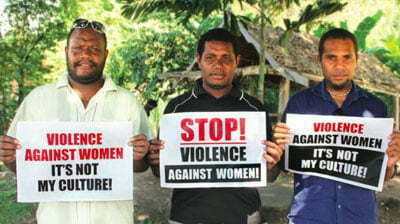 Participants expressed that the program has had a transformative effect on their own behaviour and the behaviour of their team mates, club management and even fans and the communities where they live. They now have an increased awareness and understanding of women’s equality and value, concepts of respect, leadership, communication skills, anger management and conflict resolution, which they summarise as having their ‘minds opened.’ This program is an effective first step in engaging men and boys, and their communities in a dialogue about women’s equality and respect for women’s rights; transforming attitudes and perceptions and ‘opening minds’ to another way of thinking. 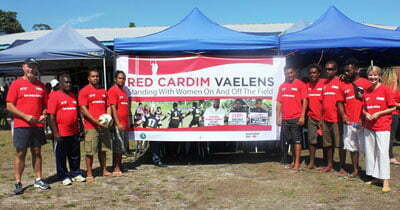 The additional benefit for the sporting clubs is the improvement in their players behaviour both on and off the pitch.  For example, Solomon Warriors Sports Club now have a strict policy of benching players who are engaged in domestic violence with their partners until the issue is solved. Aside from being benched, players who beat their partners suffer the financial penalty of losing their training and match fees.  Staff therefore expressed their responsibility to help players resolve issues quickly and effectively for the mutual benefit of all concerned. 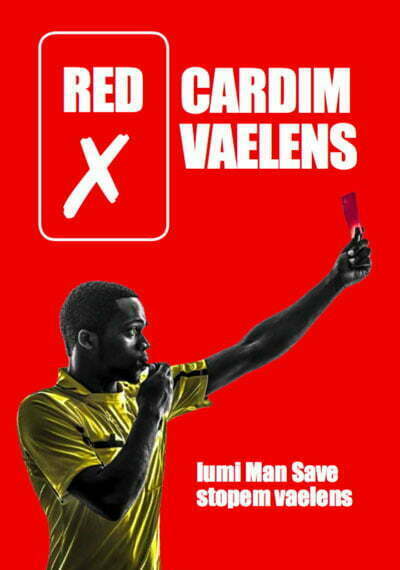 Many of these clubs have girls and women’s teams and where training occurs at the same location girls and women joined the training.  For many boys and men this is the only time they have ever been able to talk with girls and understand women’s perspectives, as speaking about these topics to women is culturally inappropriate in the community context. Women’s mutual engagement in the program is seen as highly desirable by the young men and all report their female partners and relatives, their fans and communities support their engagement with the program. All believe that the program should be scaled up in their own clubs and replicated in others in all provinces in Solomon Islands.

Women in the club have learned a lot from the [RCV] trainings and feel more confident to speak and the girls have learned that they are to be valued. The younger men have learned how to treat women properly and the older men have reformed themselves, so now there is an open discussion about violence on the club and the community.  My husband used to drink and smoke and used to come home and destroy everything and beat me badly.  My son would cry and be fearful as a baby.  When he got older he got angry and asked his father ‘why are you trying to kill mummy?’, his father answered ‘because your mother is stupid’.  My son hated him and used to tell his school friends his daddy was a ‘bad man’.

Since the program the senior men in the club have challenged him publically about his behaviour and he has finally listened and learned.  He says his ‘mind is open’ to his behaviour...he’s ashamed of how he used to behave now when he thinks about what he used to do to me.  We still argue sometimes but now, if he feels angry he just takes a walk and comes back and talks. He’s stopped drinking and smoking and fighting at home and outside…so we have more money... he’s happier and more devoted to the family.  His child is no longer afraid of him or angry with him anymore and they have a really good relationship.

I’m REALLY proud of him and the work he does with other young men in the community against violence.  I feel safe and happy at home…can talk to him now because he listens.

I don’t feel scared anymore I feel free!! [raises her hands in fist and flings her fingers out wide like they are escaping, smiles and laughs]

Schools in Papua New Guinea Promote Hand Hygiene for All

In Papua New Guinea Global Handwashing Day (15th October) 2020 was celebrated through a series of activities at a host school in Kavieng. The day… Read More

No longer a pipe dream

Emeline is one of four apprentice students working with Live & Learn Tonga on the Australian government funded Tonga Water, Sanitation and… Read More

Lasting change in Tonga with VSA and Live & Learn

For its efforts in sustainability and conservation, the Drawa Block Forest Communities Cooperative has received an Energy Globe Award for Fiji. With… Read More
Previous Next